COMPKART Doubles Down at Super Nationals!

The customary end to the racing season for the COMPKART team ended with this past weeks Superkarts! USA Super Nationals XXI, which was again held under the glamour of Las Vegas (USA).  The 21stannual event had increased attendance matched by an entirely new level of competition across nearly every category. All official COMPKART entries for the event were situated in three different IAME X30 categories and the brand put a heavy stamp on the competition as the team doubled down on its efforts! 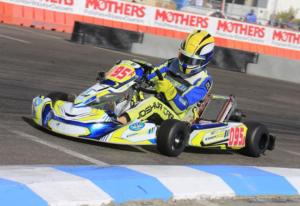 A solid day of testing on Wednesday exposed the COMPKART Fluo at the pointy end of the gird with Josh Car and Austin Garrison taking the top spots in nearly every session with Dante Yu close on their heels in X30 Sr. Not to be left out were the other team drivers who were solid on the time charts as well. For Thursday the team was ready for the important qualifying as two groups of 48 drivers creates a difficult situation to gain clear spaces for the perfect lap.

After an action packed set of heat races, Josh Car lead the brand with points to start the final in 4th having highlighted his efforts with a win in heat two. Yu slotted in 27th after the heat races as Ilavia made it straight to Super Sunday after receiving the hard charger award coming from 94 on the grid to 30th.  Garrison was not as lucky, with speed to challenge for the win, two heat race DNF pushed him to the LCQ which he dominated in fine fashion.  After some good heat races, Vacala and Apuzzo had to settle for missing the final on Sunday.

Final time on Super Sunday was electric with the backdrop of the Las Vegas icon – ‘Circus Circus’ and a full field of 46 of the world’s finest drivers. From the drop of the green flag Josh Car went to work disposing of the second and third place drivers to slot into 2nd by lap five where he managed a masterful race to cross the line in 2nd, but with a fair penalty to the on track winner, Josh Car was awarded the win – A well-deserved effort for the young Australian and the team at COMPKART.  Unfortunately Dante Yu was sidelined on lap one in a turn two incident, where fellow front runner Austin Garrison put on a clinic coming from 36th position to finish in 16th (hard charger award) and teammate David Iliava who was up in the top fifteen before being knocked off the circuit to recover for 23rd. 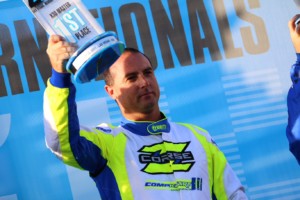 In X30 Masters the team at COMPKART triumphed yet again on Sunday, this time with Australian Kris Walton.  Walton, was arguably robbed while at the cash register in 2016, ended hitting pay dirt in Vegas this time around.  Walton took a mixed qualifying run to go 1-2-1 in his heat races to secure pole position for Super Sunday.  Walton had a slight battle early on before taking the lead and convincingly winning the 21st annual event giving the Australian ultimate redemption from 2016.

Fellow teammate and three time winner Leonardo Nienkotter, a front row fixture in Las Vegas did not disappoint either.  Nienkotter qualified P2 and backed that up with 1-2-2 results in his heat races, thus presenting the ultimate front row lockout for the Fluo of COMPKART.  A dodgy start put the Brazilian back to 11th place early on in the final making the task difficult to regain the spots necessary to challenge for a win, however Nienkotter managed to climb back to 5th place in the final tally with fastest lap by over two tenths proving his speed was remarkable.  Also to be noted was COMPKART teammate Marques Markenson who showed top five pace all event, unfortunately some uncontrollable circumstances on track forced Markenson deep in the field for the final.  The Brazilian managed a solid final to finish in 20tha result not indicative of his speed, but nevertheless one that was hard fought.

Rounding out the weekend was the teams’ lone entrant in X30 Jr, Australian Harrison Hoey. Hoey who managed to qualify in 18th place also competed in his heat races in the top spots but with an unfortunate flip in heat race three due to an unavoidable incident the fast Australian’s hopes for a top results were dashed.  Hoey did however, make it straight into Super Sunday’s final and ripped through the field after falling to last at the start to finish in 28th place finish with the 4th fastest time of the final proving the speed of the COMPKART chassis is undeniable yet again.

“The Superkarts! USA Super Nationals always boasts the best competition in the world on a true ‘fair’ playing field.  Our materials proved to be a match that the competition did not have answer for across all the X30 categories. It’s especially gratifying to mention that our drivers were utilizing only original COMPKART materials, a critical point to note as the competition cannot t say the same.” – COMPKART Management